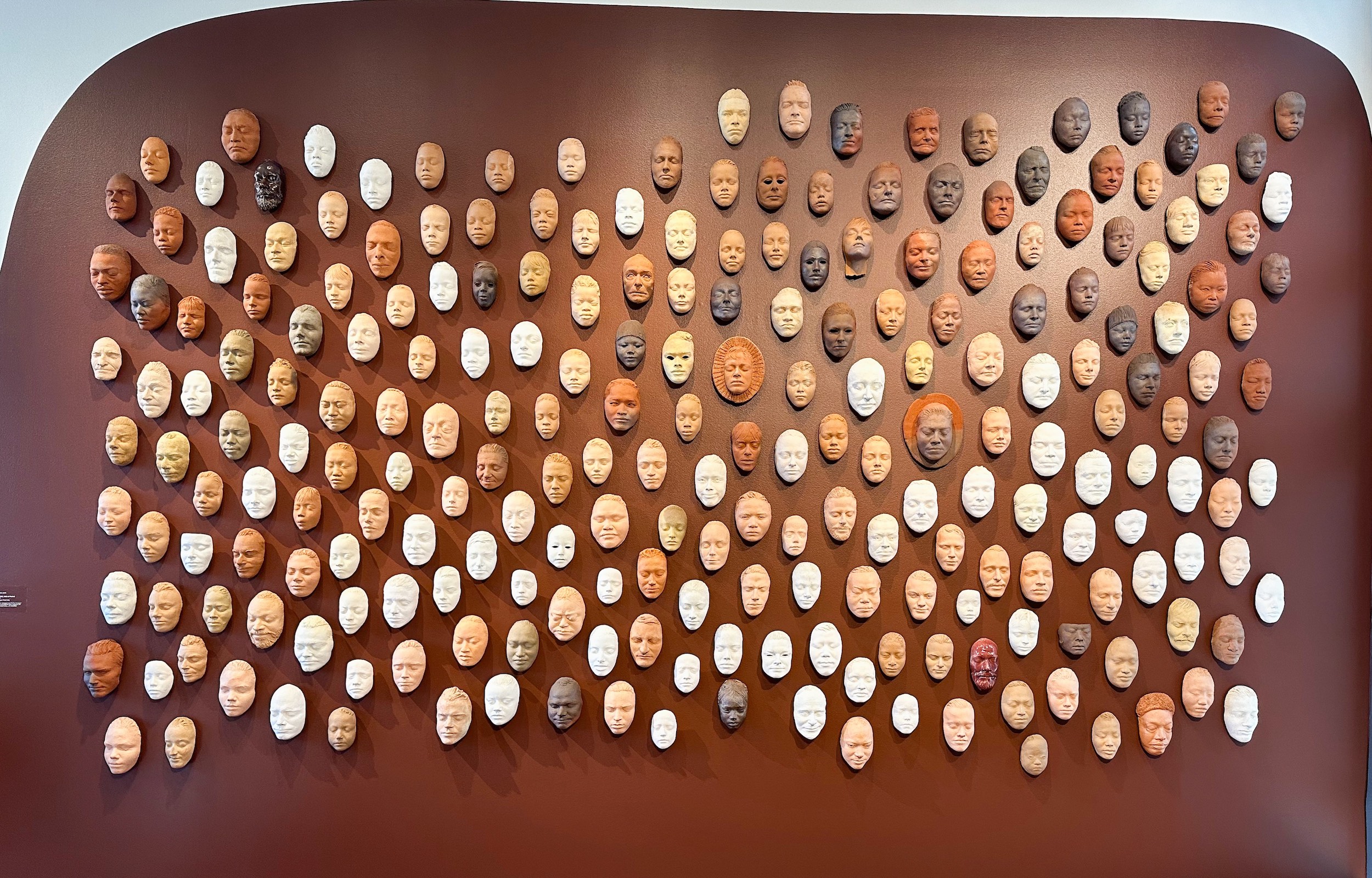 STANFORD, CA – Currently on view at Stanford University’s Cantor Arts Center is the exhibit East of the Pacific: Making Histories of Asian American Art, curated by Aleeesa Pitchamarn Alexander. The exhibition is one of many inaugurating the Asian American Art Initiative (AAAI) at the Cantor.

Co-led by curator Alexander and art historian Marci Kwon, the initiative was launched in 2021. Its mission is to acquire, preserve and exhibit works by Asian-American artists and foster scholarship and research through education, digital documentation and public programming.

A major part of East Pacific is dedicated to Executive Order 9066, which ordered the forced incarceration of Japanese and Japanese Americans living on the West Coast, and the effects of Japanese-American internment weigh heavily on the exhibit. As I read the wall texts that told stories of Japanese American artwork lost or destroyed as a result of their forced incarceration during World War II, I couldn’t help but think of the artists’ studios and teaching careers that were lost to or destroyed by the internment of Japanese Americans. What could have been possible without the racist policies of the United States government?

At the same time, I was encouraged by the resilience of many of these artists – those who continued to teach, create and document their experiences in the camps. Several artists in the exhibition worked on the experience and conditions of internment in these incarceration camps, including Henry Yuzuru Sugimoto, whose powerful black and white linocuts are featured. ‘Goodbye My Son’ depicts the heartbreaking scene of an interned family saying goodbye to their son, who has been drafted or volunteered to serve in the US military, to prove his loyalty to the country that held him. incarcerated. Directly below is “My Son Hurt in Action”, which depicts a family (possibly the same) receiving the news that their son has been injured while serving in the US military. These linocuts were donated by Patrick and Sandra Hayashi; Patrick himself is a survivor of an incarceration camp.

East Pacific also revisits Other Sources: An American Essay, an exhibition curated by artist Carlos Villa in 1976, which, by focusing on Bay Area artists of color, was an assumed act of reclaiming space on the occasion of the American bicentennial. This section includes a fine example of Leo Valledor’s signature shaped canvases, this one called “Rothkokoro”, in which shimmering geometric angles and lines float in and out of a field of orange and tie his two canvases together. . Other highlights are a small abstract expressionist painting by James Suzuki exemplary of his early compositions of orb-like shapes floating in a field of gestural brushstrokes, and a large painting by Bernice Bing that shows the influence of the gestural abstraction, as a large area of ​​blue provides a counterpoint to the rest of the steep, cliff-like scaffolding of brushwork and color. At the more playful end of the spectrum are non-functional ceramic vessels by Toshiko Takaezu and a graphic grid of biomorphic pictographs by Takeshi Kawashima.

I enjoyed the range of work that was in East Pacific, and, by extension, the collection that the AAAI is beginning to build, since most of the exhibition was drawn from this collection. Many works of art have responded to the natural beauty of the west coast in various ways, such as a 1930 painting, “Coastal Scene”, by Teikichi Hikoyama, which depicts waves crashing on rocks in a painting style of typically Euro-American landscape. On the other hand, a stunning sumi e Chiura Obata’s painting titled “Yosemite Falls” interprets the drama of Yosemite’s landscape through traditional Japanese ink painting. Dong Kingman’s exquisite watercolor, “Chinatown, Clay and Grant”, from c. 1950 is rather simple, while Martin Wong’s “Chinatown Dragon” is painted in his characteristic blend of social realism and visionary art. Much of the exhibit did not explicitly address identity; it has allowed for a range of expression not typically granted to Asian American artists – something particularly refreshing in this rare moment of visibility, when it often seems like the only way to be an artist Asian American is to do readable work on Asianism. It is particularly discouraging to see Asian American-run shows, organizations, and galleries fall into this trap and implicitly or explicitly promote this idea.

To coincide with the inaugural exhibitions, AAAI organized IMU UR2: Art, Aesthetics, and Asian America, a two-day symposium bringing together prominent Asian and Asian American artists, curators, and scholars to share short presentations and participate in panel discussions. group discussions. This event was probably the largest gathering of Asian American artists, historians, and scholars in my lifetime, and certainly the largest I have personally attended. Each panelist – including Margo Machida, Christine Y. Kim, Joan Kee and John Yau – gave a 10-minute single-image presentation related to the themes of the panel, highlighting the multiplicity of ideas and questions around Asian art American. During the presentation session of the online platform Catalog raisonné by Martin Wonganother of the AAAI’s inaugural projects, art historian Mark Dean Johnson noted that even the title of the symposium (named after a phrase by Wong) “is an expression of togetherness, but also of difference and fragmentation at the same time”.

Several of the artists discussed their own work, such as Patty Chang, whose presentation focused on her recent collaborative project, learning purposes, in which she observed a necropsy of porpoises with wildlife pathologist Aleksija Neimanis and ecofeminist writer Astrida Neimanis, and raised questions about interspecies empathy and how it might open up questions of identity. Art historian Patrick Flores used a work by Anita Magsaysay-Ho to inspire the public to take a more global and transnational view of Asian Americanism. Poet Dorothy Wang used a poem by Prageeta Sharma to warn of the dangers of feeling gratitude for crumbs of performance. Artist Arlan Huang’s presentation began with an oft-reproduced photo of the Godzilla Collective members from 1990 to provide a brief history of the group and discuss the various career and life paths the members have taken since that photo. On several occasions, young artists and scholars mentioned the work and support of their elders, with whom they shared a stage, and thanked them. For me, this intergenerational camaraderie was at the heart of the symposium. New York-based curator Howie Chen spoke of being invigorated by the legacy of the older generation who fought for recognition, and seeing his own role as one to examine contradictions and tensions that arise amid pressure to make “Asian American” a stable and definable identity.

Before moving to the West Coast from Brooklyn two years ago, I hadn’t realized how much living in an area with a large Asian American population would affect me. California alone is home to nearly 30% of the country’s Asian population, mostly concentrated in Los Angeles and the Bay Area. Since I moved here, I have been volunteering with GYOPO, a collective of Korean cultural producers and arts professionals in the diaspora, which may have made me feel more fully seen and valued. Instead of feeling pressured to completely assimilate or be Asian, I experienced a much wider range of what Asian Americans can say, look like, or create. I couldn’t stop thinking about it during the symposium, because it seems to be a turning point for the Asian American artistic community.

As historian Gordon Chang noted during the Art and Activisms panel, the term “Asian American” was originally intended as a provocation, a critique of white supremacist structures that erased histories, contributions, and lives. Asians living in America. Thanks to student protests in the Bay Area more than 50 years ago, together with the efforts of our elders and ancestors, we have been able to achieve a critical mass of historical scholarship, cultural analysis, and artistic creation. As artist Arlan Huang said in his powerful remarks: “We have a story. We are in a rich land. The main event, a conversation between poet Cathy Park Hong and artist Jen Liu, brought the symposium down to a human level, focusing on how their decades-long friendship has shaped their lives through recognition and mutual support, investment in each other’s careers, emotional intertwining and collaborative growth. What I took away from this frank and relaxed conversation is that friendship and deep relationships can be the fuel that keeps us going, whether big institutions pay attention to it or not.

One of the questions that East Pacific, IMU UR2, and AAAI Confronts is: How do we build on the foundations that have been built for us without resorting to cheap visibility politics and becoming victims or enablers of diversity management? Some panelists raised a version of this question during the symposium. “What project are we building together? Is it enough just to see us? asked artist and filmmaker Tiffany Sia. Patty Chang asked, “What are the ways, beyond identification and definition, to unite our group or movement?

In imagine otherwise (Duke University Press, 2003), Kandice Chuh proposes that one can conceive of “Asian American studies as a field of collaborative antagonisms, collaborative in the dual sense of working together and working subversively against, and antagonistic in the way various approaches to knowledge critique each other and identify each other’s limitations. In this spirit, as evidenced by East Pacific and IM UR2, AAAI is uniquely situated to support the field of Asian American art as a platform to celebrate and preserve our shared histories and legacies, to critique structures that have historically failed and continue to fail us, and to challenge the racial and political essentialism of visibility.

On its 100th anniversary, Akris creative director Albert Kriemler reflects on the creative and artistic collaborations that have defined the luxury brand