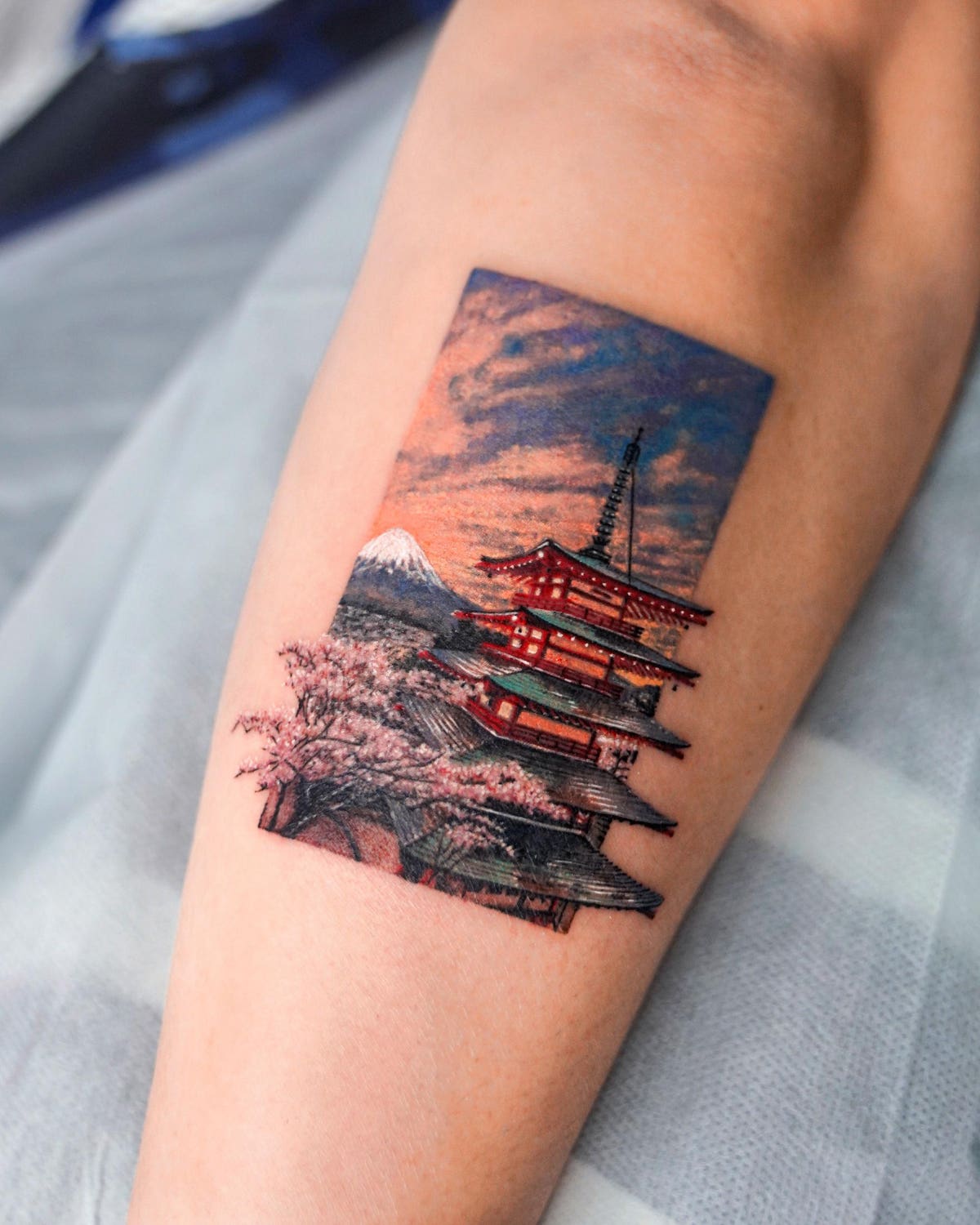 This artist inks your elegant wanderlust in a multi-layered landscape

We create memories of the most stylish places in the world – whether it’s her selfies in front of the Eiffel Tower during Paris Fashion Week, or with the Manhattan skyline behind us during New York Fashion Week, it’s so much more than simply posing in front of cliched monuments while wearing the best of our fashion looks.

But how about making a travel keepsake more permanent, for the stylish fashionista? A tattoo artist named Minyoung Sim, and works under the name of EQ tattoo artisthas inked landscapes in quaint little rectangular frames, which capture our wanderlust, something to enjoy long after your flight has departed.

Sim uses a rectangular landscape as a window into your travels, much like a postcard.

But this form of postcard is much thinner than your average postcard, it looks more like a window – a window into your wanderlust or a travel souvenir.

“I fill the rectangle with the beauty of oriental paintings,” she said. “When a client tells me about their travels to Seoul, Tokyo or Taiwan, for example, I use patterns that you see in traditional oriental paintings to fill in the tattoo. It adds layers of elegance and magic to what would otherwise be a typical iPhone travel photo.

She adds animals, like cranes and tigers to these frame tattoos. “You look at the world through a window, and the beauty of oriental painting is also seen through a window of your travels,” Sim said. “Everyone has a travel story, and each person’s story is expressed naturally in the rectangular frame.”

One tattoo depicts a honeymoon destination that its client has visited, while others highlight family trips, personal vacations, and important life moments.

She has inked the less traveled backstreets of Portugal, the left bank of Paris and the bustling streets of London, all in small vertically thin rectangular tattoos. Sim also inked Korean locations, such as the streets of Seoul and the mountain peaks of the Japanese countryside.

“Every customer records where they traveled, and many get tattoos to remember their time in South Korea,” said Sim, who works at a studio in the Hongdae district of Seoul, Korea. “About 80% of my clients are foreigners.”

A recurring symbol in his tattoos is the red sun, an influence from ancient oriental art, particularly Irworobongdo, a Korean screen popularized in the Joseon Dynasty, which was adorned with landscapes and often red suns. Suns and moons usually represented royalty, such as the king and queen, overlooking and protecting a royal court, represented by a landscape.

“The sun is something I always put last when I finish painting a tattoo on someone,” she said. “I think it would be easy to think of the sun as an element of a point, and the red sun in my painting is like my own personal seal or mark.”

A client wanted to remember his time in South Korea, so requested a design that merges the Namsan Seoul Tower, which is one of Seoul’s highest points, with the Hanok district, which is full of historic Korean houses , and country. national flower, the rose of Sharon, known as Mugunghwa by the locals.

“With travel tattoos, my clients want to create a memento of places with their own personal memories,” she said. “It’s not just in Asia, but around the world, and I wrap days, weeks and even months of travel in a piece that highlights their fondest travel memories – stories they share with me.”

His work is small and detailed, which is perfect for timeless landscapes. “I like to use very detailed, elaborate and bright colors, and using a historic oriental painting style lends itself well to such an elegant design,” she says. Sim also uses the recurring tiger symbols, “which symbolizes strength”, she adds, “and wards off bad luck – it is known to bring good energy”. Also find whooping cranes in his landscapes, as they represent longevity.

In one tattoo, Sim has inked a landscape of layered rooftops of a Tokyo neighborhood in an arm tattoo. “The client wanted to record the Japanese winter landscape in my style, so the tattoo shows a snow-covered Japanese house, a crane, and a red sun hovering over the landscape,” Sim said.

In another, she inked the streets of a Tokyo skyline in a pastel-hued tattoo. “It’s based on the photo the client sent me and shows how complex and personal people can really capture the cities they visit,” she said.

But honeymoon destinations are among the most popular wanderlust tattoos, such as a coin, which shows a wedding venue, the Fort Canning hotel in Singapore, alongside symbolic flowers, and places the couple visited on their honeymoon, such as the Colosseum in Rome, and the fairy-tale Cappadocia, the honeycombed hills of Turkey’s central Anatolia region. Below, a rabbit and a turtle represent husband and wife.

“With travel, you don’t know until you leave,” Sim said. “I think travel tattoos are becoming more and more popular as we venture out into the world again, and telling a story through visual montage, inked collage, is the best way to keep this memory, forever.”