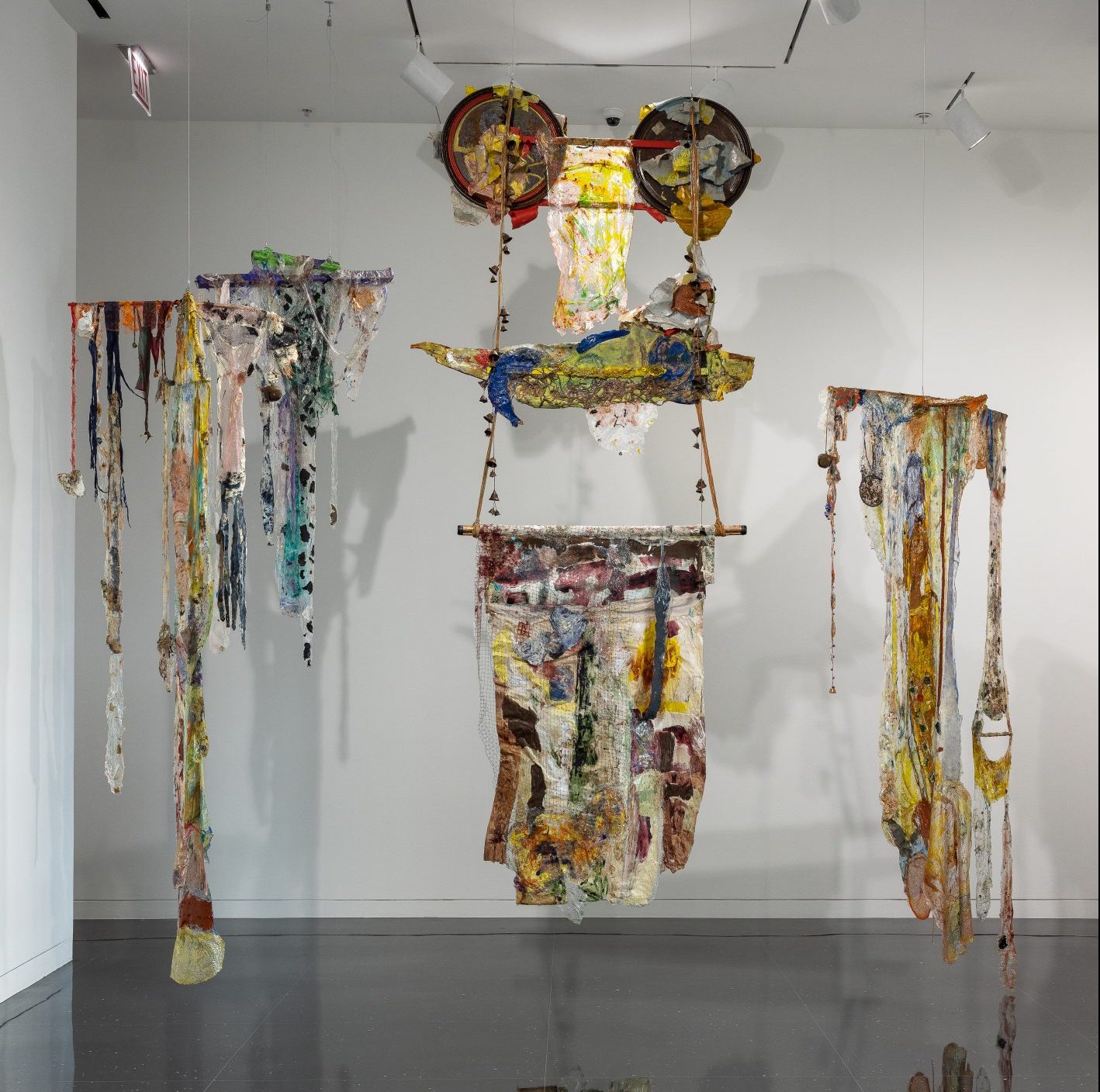 The Music of Life: Listen ‘N Home by Suzanne Jackson at the Arts Club of Chicago

Artist Suzanne Jackson has an enviable biography, spanning nearly eight decades and most of the Western Hemisphere. The St. Louis native grew up in territorial Alaska, studied painting in San Francisco and toured all over South America as a dancer. In the late 1960s, she took classes with Charles White at the Otis College of Art and Design, ran a renowned artist space in Los Angeles called Gallery 32, and in the 1980s studied design. theater at Yale with Ming Cho Lee.

Jackson has been based in Savannah since the mid-90s. Simply calling her a “painter” fails to capture the unique scope and depth of her artistic accomplishments, let alone her poetry or decades of teaching. Yet, as enthralling and illuminating as his story is, it is Jackson’s work, shown at the Arts Club of Chicago, that speaks volumes about what it takes to make not just a career, but a life in the arts and the dividends that kind of commitment can bring.

From the titles of the fourteen major works exhibited to the physical fabric that composes them, references to music, jazz and blues abound. In fact, the show’s title “Listen ‘N Home” not only references the artist’s early childhood experiences with Chicago jazz on 78s – imported to California via the highly sensitive tastes of his bustling aunts – but also to the rich and important role music has played and continues to play in his life. Prior to the pandemic, Jackson was a co-host of “Listen Hear,” a weekly jazz show on Savannah State University radio.

In this mini-retrospective, the music of Jackson’s life comes to life in the jerky rhythms of his works and in a maximalist aesthetic that is the visual equivalent of John Coltrane’s free jazz masterpiece “Ascension” played at full volume. Like the difficult musical idiom, his mixed-media works mimic the intensity and emphasis on the diversity of materials, and are not always easy to absorb. Indeed, many of the elements that make up these luminous objects (scrap metal, dried and discarded paint, plastic netting) could have ended up as trash if Jackson’s keen eye for texture contrast and mindset ecological had not prevailed.

Painting often speaks of its ability to suggest illusion, but in this exhibition Jackson expands its vocabulary in a decidedly sculptural way. The acrylic medium is poured, peeled and pressed together, unleashing its unrivaled versatility; while Bogus paper – a lightweight recycled paper used for a variety of applications, and first encountered by Jackson as a set designer – lends a layered, deceptively sturdy frame to many pieces. 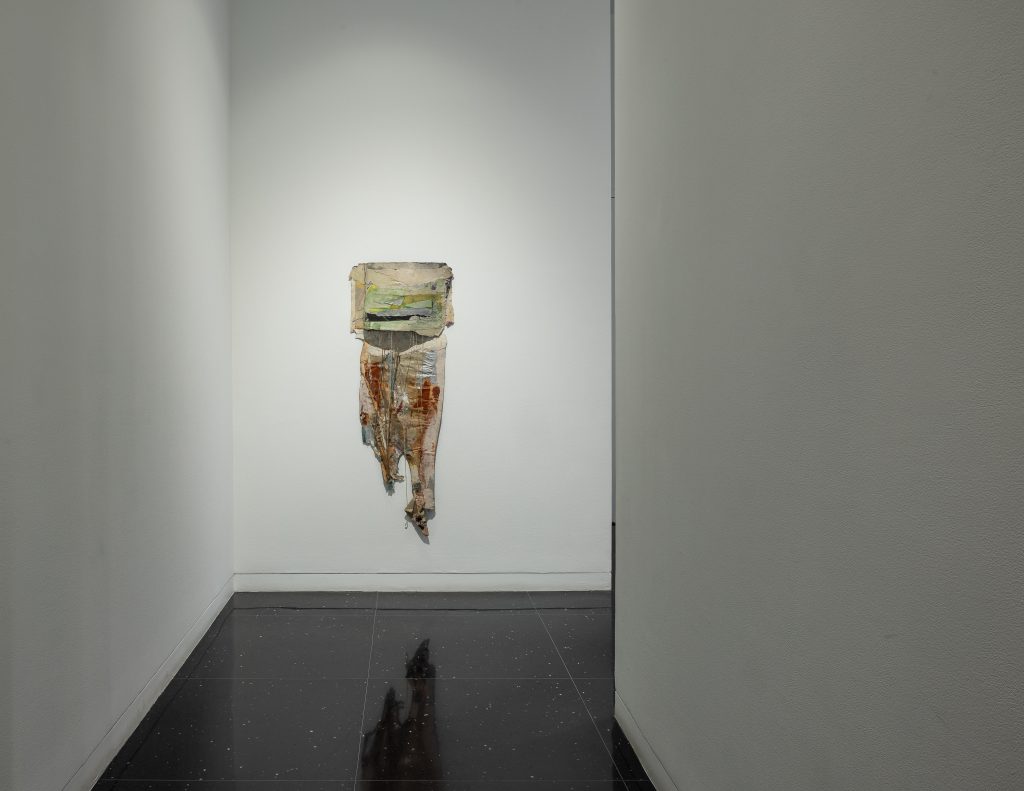 For example, the jagged cream-colored outlines of 2001’s “Bogus Boogie” appear substantial and heavy. Yet even subtle changes in the physical environment of the Arts Club (a door opening or an attendant passing by) cause delicate tremors of movement in the work. At one point, the long, tendril-like fibers that descend from the upper register of the piece gently vibrate like the softly plucked strings of a classical guitar. The contrast between the surface appearance of the object and its deeper reality is a theme throughout the show. 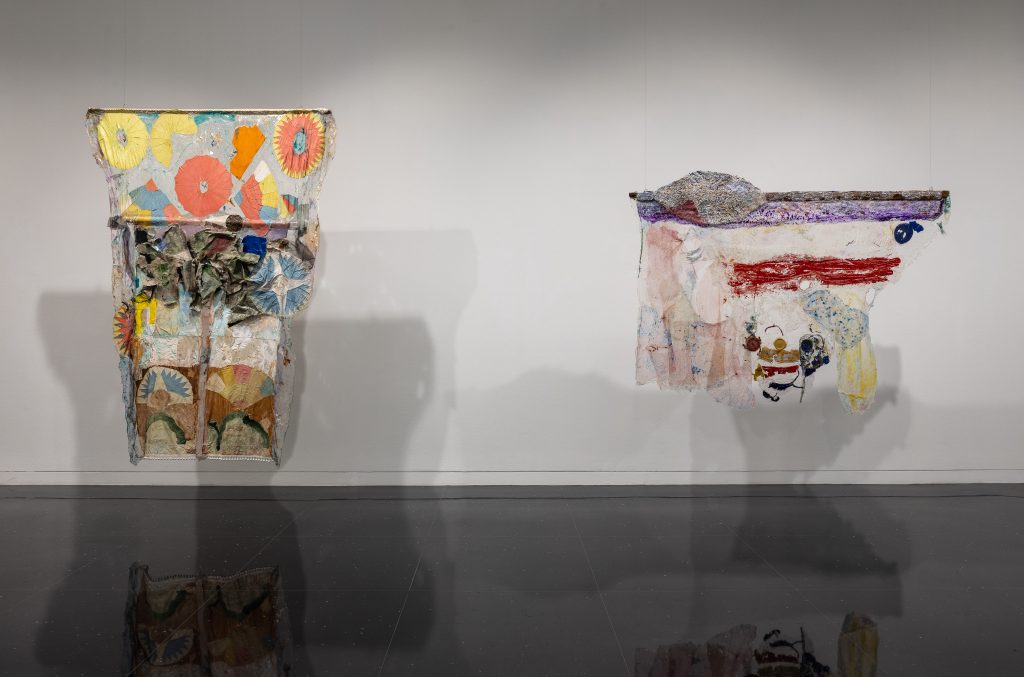 The standout track “Red Over Morning Sea” features a red streak of smoldering cadmium that travels at lightning speed across the surface of the paint. Both at sunrise and sunset, it crackles in a translucent veil of interference-influenced acrylic tides. The total form of the work takes on the character of the geographical dimensions of the United States. Brimming with light and clarity, ‘Red over Morning Sea’, like its majestic brethren, hangs from the ceiling rather than the wall and effortlessly transcends the pull of gravity. The musicality of these shimmering visual relationships within and between the works is a joy to behold.

With few exceptions, Jackson’s work lacks the obvious narrative structures, compositional strategies, focal points, or visual hierarchy that define both traditional and historical painting as well as painting after the postmodern turn of the 1970s. But a few tantalizing painted and drawn figurative references can be excavated. 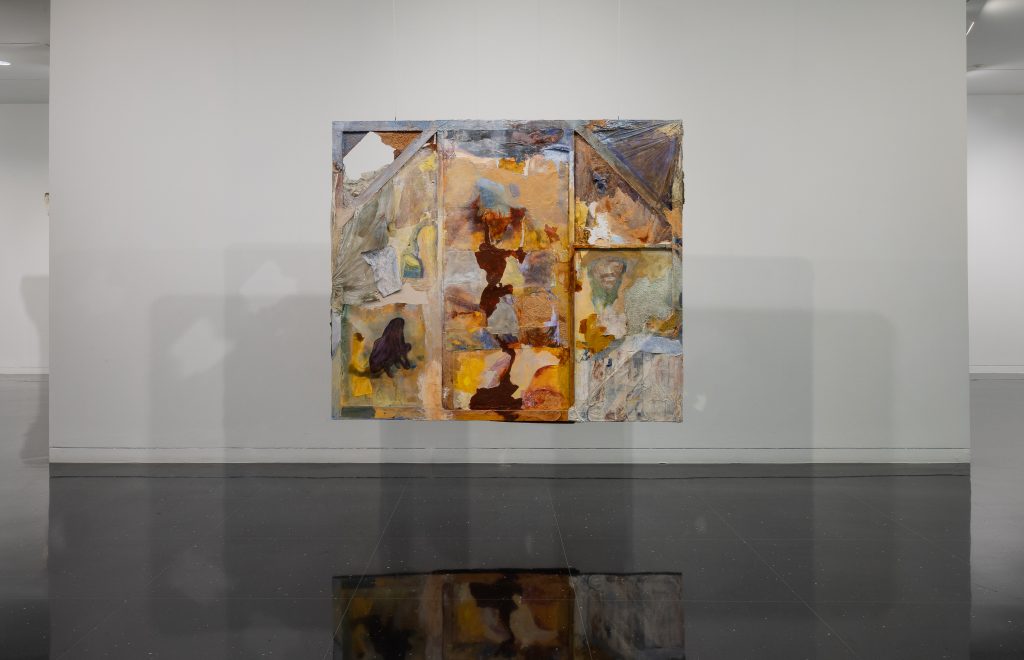 In the combination skins of “Bilali’s Dream”, a man’s face hovers spectrally on the left side, enveloped in blue-green features that dissolve into the creamy white of the nebulous space he inhabits. Less obviously, the lower left corner is occupied by rich red-purple swirls of translucent acrylic paint that suddenly come together in the form of a crouching figure with outstretched arms. It’s a small moment of scintillating magic in a show full of it. A silent reminder of paint’s unrivaled ability to take on new forms, to be both itself and something completely different.

Jackson has a superior sense of materials and an idea of ​​how to bring them together in ways that fuse disparate elements into seamless wholes that feel right. The works reach their climax when the artist maintains the relationship between the pictorial and sculptural qualities of his multiple mediums in the most indeterminate way. It is a skill honed through years of effort and stems, in part, from seeing one’s own life as a work of art that can be shaped and molded over time. We have become so accustomed to the relentless merry-go-round celebrating the latest and greatest freshly minted MFA that to encounter the work of an artist who has lived a life and approach to craftsmanship that is not only self-confident , but contains the maturity, experience and credibility to back it up feels like an all-too-rare treat. As rich and vital as the music that drives it, “Listen’ N Home” rewards repeat visits.

“Listen ‘N Home” is on view until December 23 at the Arts Club of Chicago, 201 East Ontario.

Rely on research | The University of Chicago Magazine