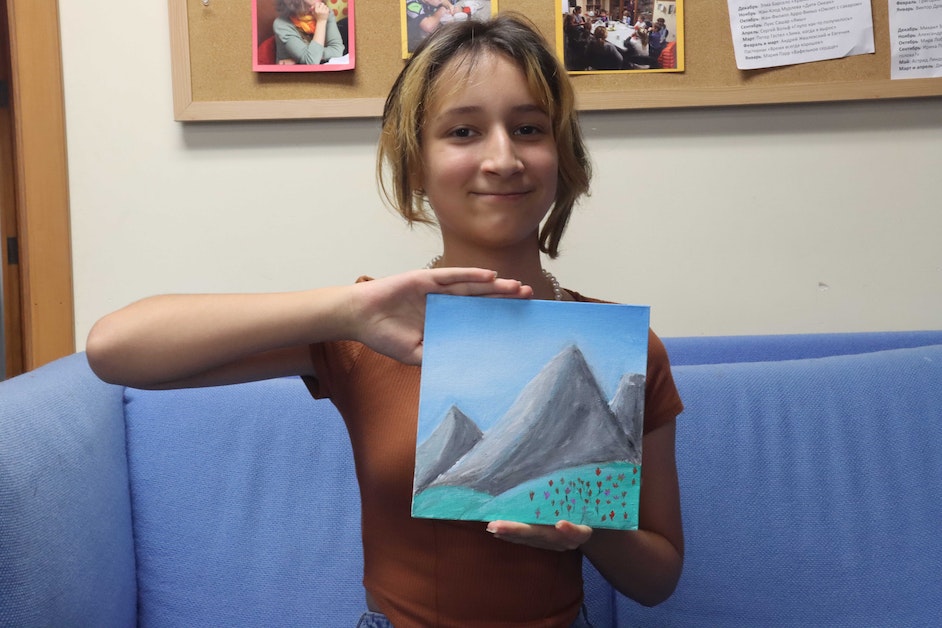 Starting school can be difficult, especially as a Ukrainian refugee who doesn’t speak English.

Many newly arrived Ukrainian refugee children are starting school in Washington State this fall. Some of these children are not yet fluent in English.

Sabrina is 12 years old. She is an artist who likes to paint landscapes.

She is one of more than 200 Ukrainians who fled their home country after the Russian invasion and settled in Washington.

Sabrina and her family arrived in King County a few weeks before the end of the last school year.

Like some refugees from this war, Sabrina’s first language is Russian. She speaks very little English.

Sabrina spent her first day at a Seattle-area college just before summer vacation.

“The first day, I didn’t talk much to others,” Sabrina said. “On the contrary, they tried to talk to me, via Google Translator, and using gestures.”

KUOW does not use Sabrina’s last name to protect her relatives who are still in Ukraine.

Vanja Pejic, a psychologist at the Trauma Community Resiliency Center at Boston Children’s Hospital, says newly arrived refugees often face challenges that go beyond simply bridging a language gap. These challenges can include things like “finding a new home and community, and culture attending a new school, experiencing isolation or discrimination from peers or the community.”

For Sabina, this isn’t the first time she’s run away from home, joined a new community and learned a whole new language.

Sabrina grew up in Crimea. When she was 4 years old, Russia annexed the region. His family fled. His parents decided it wasn’t safe to stay at home.

“When my parents were packing up and leaving Crimea, I was told we were going on vacation,” Sabrina said.

They fled to Lviv, Ukraine’s capital and largest city. His parents wanted to get as far away from the Russian border as possible. In Lviv, where Sabrina started daycare, most people spoke Ukrainian.

“At first they thought I was Russian because I spoke Russian. I didn’t know Ukrainian,” Sabrina explained. “Of course, as a kid, I was offended. I didn’t want them to think I was Russian. Dad said I wasn’t Russian.”

In less than a year, Sabrina has become fluent in Ukrainian and has made many friends.

Even after adjusting to their new home, Sabrina and her family hoped to return to Crimea.

“[My] parents said we would go back when the war was over and Ukraine won,” Sabrina said.

But, they could not return to Crimea. Seven months ago, Russia launched a full-scale invasion into Ukraine. Sabrina’s family packed up and fled the country that night.

“Like the first time, I was just told we were leaving,” Sabrina said. “I already knew about the war, so there was no point in lying to me.”

They bounced around in different locations before finally settling in King County in late May. Over the summer, Sabrina had time to practice her English.

She also had fun.

She attends a summer camp for Ukrainian refugee children at Lucky Pen, a school in Redmond. She took an acrylic painting course and painted a scene with three snow-capped mountains.

Dr. Rajeev Bais, who runs a clinic for refugees in South Carolina, says refugee children who learn new languages ​​thrive when they have room to be a child.

“That’s where good friends come in, good community members come in, and good programs come in and they’re free to play,” Bais said.

She still uses Google Translate to communicate. But, his English is improving.

It’s enough to make new friends in his new home away from home.

Reception of the Cashwell exhibition at the Boyd Gallery on Friday