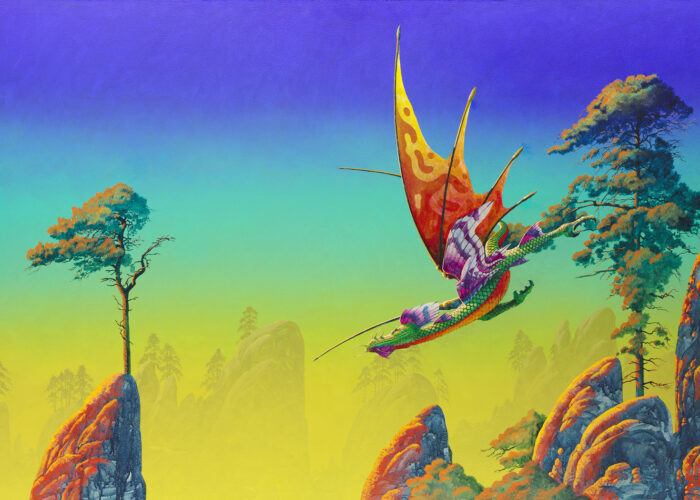 “Thanks to Roger’s advice and imagination, our animators brought his paintings to life”, Marc Melzer of Minds Over Matter said in a statement. “Go through the portal to its mythical landscapes. You will be surrounded by alien flora, hovering dragons, strange flying machines, grasshopper/elephant hybrids and many other amazing sights and sounds.”

“The Roger Dean Experience is a portal that transports our audience into never-before-seen, expanded, living 360-degree versions of their original worlds,” said design team member Travis Threlkel. “This is where the dragons take you to their amazingly wondrous and magical worlds.”

If this all sounds a little esoteric, that’s by design.

“I don’t know exactly what we’re doing and we probably won’t until we’re done, but it’s amazing,” Dean said in a statement. “The team I’m working with is brilliant and very experienced with digital immersive spaces, so I’m really looking forward to seeing it finished and seeing what we’ve come up with.”

Before the immersive “Dragon’s Dream” show, there are two more traditional exhibits dedicated to Dean, who in addition to his album cover designs, is known for his architectural designs and iconic logos for brands such as Virgin, Tetris , Harvest, Vertido and Psygnose. He also has designed the “sea urchin” chair, widely regarded as the predecessor of the bean bag.

“The Secret Path: The Art of Roger and Freyja Dean” runs at the Haight Street Art Center until October 30, before heading to other venues.

Before that, however, Dean is also set to be the featured artist at the Rock Poster Society’s annual Rock Poster Festival on October 15 at the Hall of Flowers in San Francisco’s Golden Gate Park, which usually attracts over 30,000 fans from around the world. entire. the world.

“Like countless others, my interest in Roger Dean began before I knew the man himself,” said Chambers, owner of the Chambers project psychedelic art gallery in Grass Valley (Nevada County). “It was his fantastic album covers and logos for Yes and Asia that initially caught my attention before delving into his vast and diverse career.”

He added that Chambers Obscura hopes to take “Dragon’s Dream” to other cities after its run in San Francisco.

“Roger’s worlds will come to life, and I look forward to sharing that experience with everyone in the Bay Area and beyond in the times ahead,” Chambers said.

‘Steven and William Ladd: Lead With a Laugh’ opens at Sarasota Art Museum