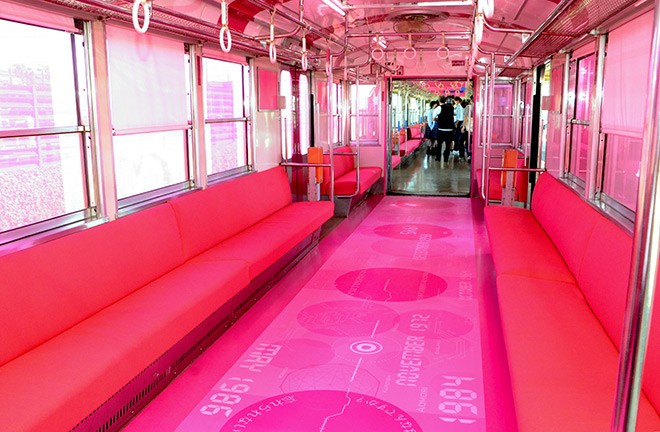 HIROSAKI, Aomori Prefecture – Pretty as a picture, a train with its interior completely painted in shocking pink passes through a verdant pastoral landscape in the Tsugaru area, making a fashion statement of its own.

The Art Train, which also sports pink lines on its body, makes up to nine round trips a day between Hirosaki and Kuroishi stations on Konan Railway Co’s Konan Line.

The flashy train serves as a “time machine” to help passengers reclaim their memories. Words such as “Where were you born?” and “What is your memorable place?” are written on the ground next to “November 1972”.

“There are spaces that no other train can offer,” said Takafumi Hara, who designed the train, at the unveiling ceremony on September 14. “I hope that each (passenger) will have access to their memories and remember precious things.”

Hara, a contemporary artist who is also a professor at Tohoku University of Art and Design, is known for incorporating pink into his works.

The prefectural government and other parties asked him to work for the project to encourage passengers to rediscover the charms of areas along the Konan Line.

He was inspired by things unique to Aomori Prefecture, such as growing apples and the gigantic “neputa” lantern floats.

The interior of the second car of the two-car train was designed by nine students from the information design course at Kuroishi High School run by the prefecture.

They interviewed local residents and drew inspiration from their stories to create a pink-themed train advertisement.

“We interviewed people from different generations, so we would be happy if (passengers) could feel the vibe of different eras,” said third-year student Konami Kimura, 17.

The Art Train is scheduled to run until November 13. Konan Railway said it would consider continuing the service after seeing how it is received by passengers.

Light, darkness and the painted landscape

Review: “Holiday”, at Arena Stage until November 6, tends to drag on