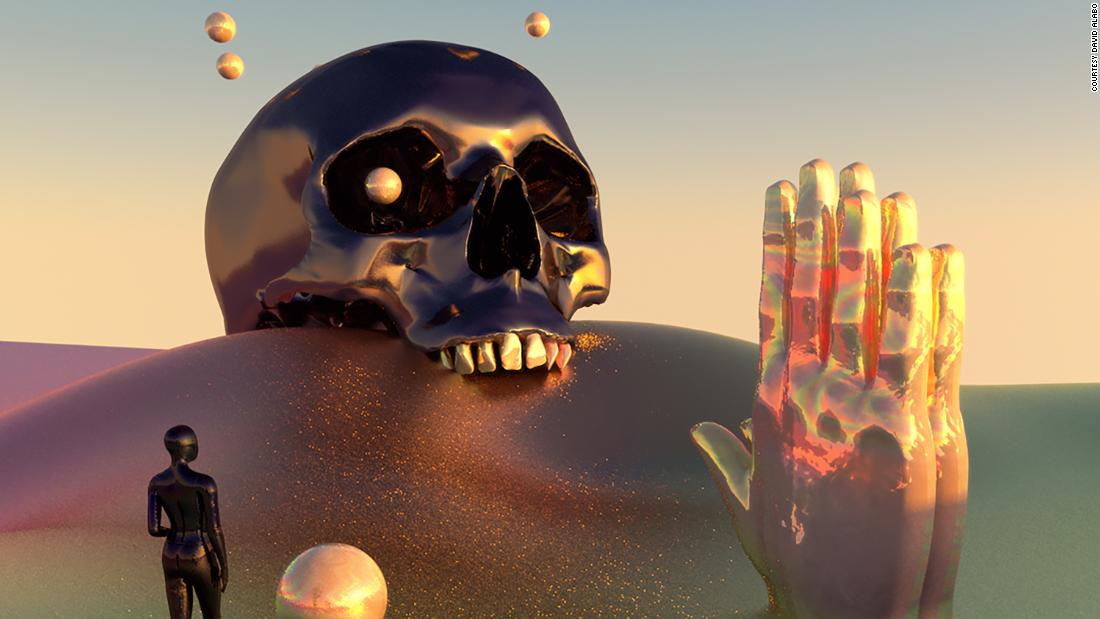 These are just a few of the iconic motifs in David Alabo’s surreal works. Like the genre’s most famous pioneer, Salvador Dali, the Moroccan-Ghanaian artist’s work is a tapestry of symbols, which he uses to explore themes of death, isolation and the future.

But whereas Dali worked with mediums such as oil paint, sketching and film, Alabo’s work is created in a virtual reality space. The artist, who is currently based in Accra, the Ghanaian capital, uses 3D sculpting software, VR headsets and a suite of digital editing tools to create his striking images. It’s a fitting medium for his sci-fi imagery, where African landscapes take on an alien quality, with moons and planets looming in starry galaxies or dark faded skies.

Although he explores black identity through these alternative and unconventional landscapes, his work is not about escapism, but about empowerment, Alabo said.

“Sometimes the nature of being a black person in this world can be a surreal experience in itself,” Alabo said. “I feel like it’s empowering to see a black person flourish in an uncharted place.”

While Alabo’s work spans genres, his art is often labeled “Afrofuturist“, a creative style that combines sci-fi aesthetics with history and fantasy. Marvel’s 2018 film Black Panther brought attention to the genre, creating a surge of interest in a job like Alabo’s.

Although he doesn’t reject the label, Alabo feels that his work falls more into the surrealist category. “I am not tied to conventional ideas of what Afrofuturism or Afrosurrealism is, because I have placed myself in a position where the work may be surreal, but the medium in which I work it may be futuristic” , did he declare.

“Sometimes the nature of being a black person in this world can be a surreal experience in itself.”

Exploring the subconscious and dreams, his preoccupation with myths and legends is another hallmark of Surrealism – but unlike the European artists who dominated the movement in the 20th century, Alabo focuses on African folklore rather than Greek mythology and Roman.

“African culture, at least in Ghana, and the folklore and stories I heard as a child are super surreal or abstract,” Alabo said. “They still serve as inspiration for my work.”

“Divine Opulence” was used by HBO in its virtual reality event for fans of the TV show “Lovecraft Country.” Credit: Courtesy of David Alabo

He sees his art as a “reinterpretation of African culture or heritage through new media”, pushing the boundaries of traditional art to create immersive experiences. Last year, Alabo’s artwork “Divine Opulence” was used by HBO (owned by CNN’s parent company, WarnerMedia) in a virtual event for fans of TV horror show “Lovecraft Country.” . Using a VR headset, guests explored the artwork, which had been “translated into this whole world with music, dynamics and sound,” he said.

While many Afrosurrealist works from the United States focus on themes of colonialism, slavery and racism, such as Toni Morrison’s novel “Beloved” and Jordan Peele’s film “Get Out”, the work of Alabo turns more to the aspirational. “I don’t mean to do a disservice by not trying to incorporate that into art, but there are (other) artists who can do that,” he explained. “I imagine futures or realities where we thrive.”

But in exploring black identity, these topics are often inescapable, and Alabo says they are “common threads” that unite Afrosurrealist work around the world. One of his works, “Justice”, was created following the murder of George Floyd and the subsequent protests in 2020. The symbolism of the work – a black panther, a raised fist, a sword, a tear and a rose – summed up the grief of the black community around the world, while continuing to move forward in the fight against systemic racism.

While acknowledging these important issues, Alabo said he wants his work to respect “the fine line between paying homage to the past, but also not allowing it to dictate your future or your perspective on the future.”

The otherworldly landscapes Alabo creates in his art are inspired by the different countries he grew up in, he said. His father worked as a diplomat and Alabo was born in Rome and spent his childhood in Italy, India and Russia.

“I feel like it’s a reflection of me navigating these weird places or places where I wouldn’t necessarily even see another black person,” Alabo said.

“I think my art revolves around these themes of isolation, reflection, or displacement, because it’s hard to be in that kind of situation.”

Her art is filled with small, solitary figures, standing in vast, empty desert landscapes that echo the geography of Morocco, where her mother is from. “I think my art revolves around these themes of isolation, reflection, or displacement, because it’s hard to be in that kind of situation,” he added. “Art is like a gift for me to finally share my own weird upbringing.”

But this isolation is not necessarily negative. “Loneliness can be extremely empowering and can be a tool for positive change,” Alabo said. “When you really sit down and shut out the noise, I feel like that can be our purest moments as humans.”

In November 2021, Alabo fulfilled one of his long-held ambitions with a solo exhibition at Nigeria’s international art fair, ART X Lagos.

Covid-19 restrictions and travel disruptions meant many members of the public could only view the exhibition online, so Alabo expanded its physical display into a digital display. Using the gyroscope feature built into smartphones, he created a virtual reality experience that didn’t require glasses.

Having worked with several international brands, such as Amsterdam-based streetwear label Daily Paper, Alabo hopes to collaborate with more Ghanaian designers. For his most recent project, he created a series of limited edition skateboard decks as part of a crowdfunding campaign for the freedom skate park in Accra, which opened in December 2021.

Another goal for 2022 is to create a studio space for “counter-culture” artists in Accra, where he has lived for four years.

“The scene here, at least in Accra, is very much alive with traditional portraiture. I think that’s really cool, but it doesn’t reflect the breadth and depth of talent that we have here,” did he declare. His vision is to have a space where artists can experiment with different tools, mediums and styles, so that virtual reality artists like him have a physical community in which to work.

“That’s the plan for 2022,” he said, “to create something here that could live beyond digital.”