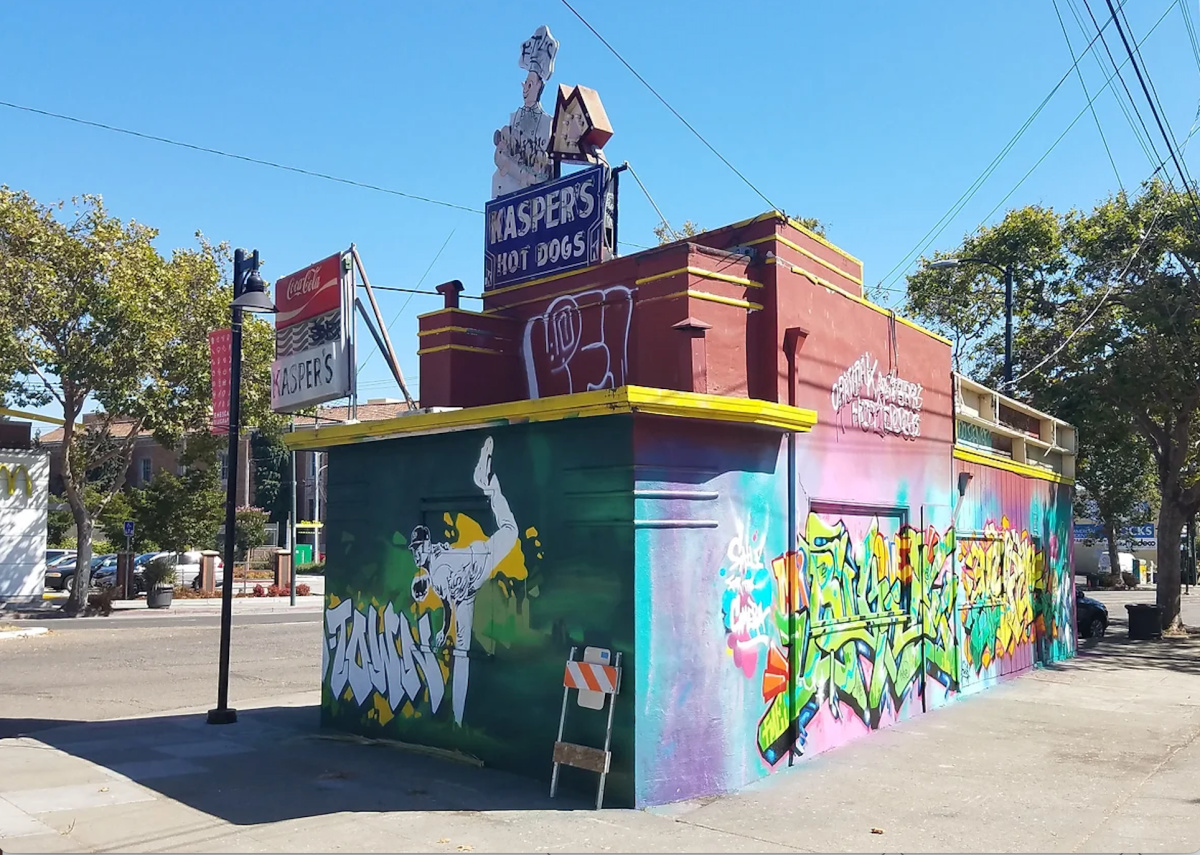 There was something about Kasper, the long-abandoned flat iron building at the point where Shattuck and Telegraph meet, that inspired Oakland photographer Malcolm Ryder to pull out his Samsung Galaxy and capture an image of the covered restaurant. of graffiti. Over the next seven years, Ryder returned to photograph the hot dog shop as it was transformed again and again, by an unknown number of artists displaying distinctive styles of artistic expression in bursts of vibrant color.

These photographs are the basis of the art documentary entitled “Thirteen Ways to See Kasperwhich opens October 15 at the Temescal branch of the Oakland Library. Each photograph in the exhibition offers a unique view of the many incarnations of the small building that sits on its own urban island.

Without knowing who this “Kasper” might have been, or how this once red, neon-adorned structure became a public canvas for anyone with the time, materials, and ability to make their own creation, Ryder was simply taken by “colourful curiosity”. (A similar obsession powers the current renovation of Kingfish owner Emil Peinert restaurant, it seems.)

Since the family hot dog business closed in 2003, passers-by and newcomers to the neighborhood may have wondered what would become of her and why, after all these years, she was still firmly established. around the corner from a McDonald’s.

While some might consider the brightly colored balloon letters and stark imagery that have appeared outside Kasper over the years to be vandalism, Ryder documented the changing artwork that would soon disappear – to be replaced by the next set of images and words – as a way to preserve and record what is inevitably a temporary art form.

Ryder writes about the transformative element of photography that elevates what is seen; linger over the images of the exhibition and note what you see: the background, the shadows, the light, the environment — everything changes around the building, but the building also changes, with each new touch of color and design.

Selections from the Thirteen Ways to See Kasper landscape image collection is on view at the Temescal Branch of the Oakland Library (5205 Telegraph Ave.) from Saturday, October 15 through January 15, 2023. From 2 p.m. to 4 p.m. on October 15, there will be a celebration of the Kasper’s building and surrounding community, with live music, refreshments and more local history.

On its websiteyou can see more of Malcolm Ryder’s Oaktown portfolio and an online virtual gallery of Thirteen Ways. All photos will be available for purchase after the show. For more information, contact Malcolm Ryder at malcomryder@gmail.com.

The poem, ‘Thirteen Ways of Looking at a Blackbird’ by Wallace Stevens, is also on display – and the viewer is invited to research the connection between how an artist perceives an ever-changing building and how a poet uses words. , asking us to observe the images with them in all their variations.

What they call “a landmark that mysteriously transforms in the Temescal neighborhood” becomes the “blackbird” that inspires artistic vision. Referencing the poem in the title of the exhibit, Hale says, was a “random idea” that occurred to her. (There are indeed thirteen images, with a triptych weaving in to make an accurate total.)

Thirteen Ways is a true collaboration between classmates and longtime friends Ryder and Hale. During a preview of the exhibition before the opening, I was able to spend quite a bit of time reading the interpretations written by the two, going photograph by photograph.

During a recent conversation with the couple, I learned that in his extensive portfolio of Oaktown landscape images, Ryder shows sides of Oakland that many people don’t know about or appreciate; it strives to “capture the overlooked essence of a largely misunderstood city”.

Both Ryder and Hale are longtime residents of Oakland and were determined to celebrate and commemorate Kasper as he transformed into what they call “one of the best outdoor galleries of public street art in East Bay”.

One of the exhibits adjoining Thirteen Ways in the library (in the downstairs room) presents a history of the Temescal neighborhood, with references to businesses of yesteryear that lined nearby streets: the original Genova Deli and Buon Gusto Bakery, just to name a couple. (Find out why and when the library’s name was changed from the one outside the building.) While not part of the photography exhibit, this additional look at the neighborhood provides timely context.

Readers may recall that by Kasper is still under renovation in preparation for the reopening of the restaurant. There is no firm date yet. As of this writing, construction continues at Kasper and space remains for some of the artwork in several niches on the Shattuck side. Change, however, is inevitable given the rapid replacement of one artist’s vision with that of another.

Helen Saunders, a vorticist with a fondness for Cézanne, is finally celebrated with a show in London