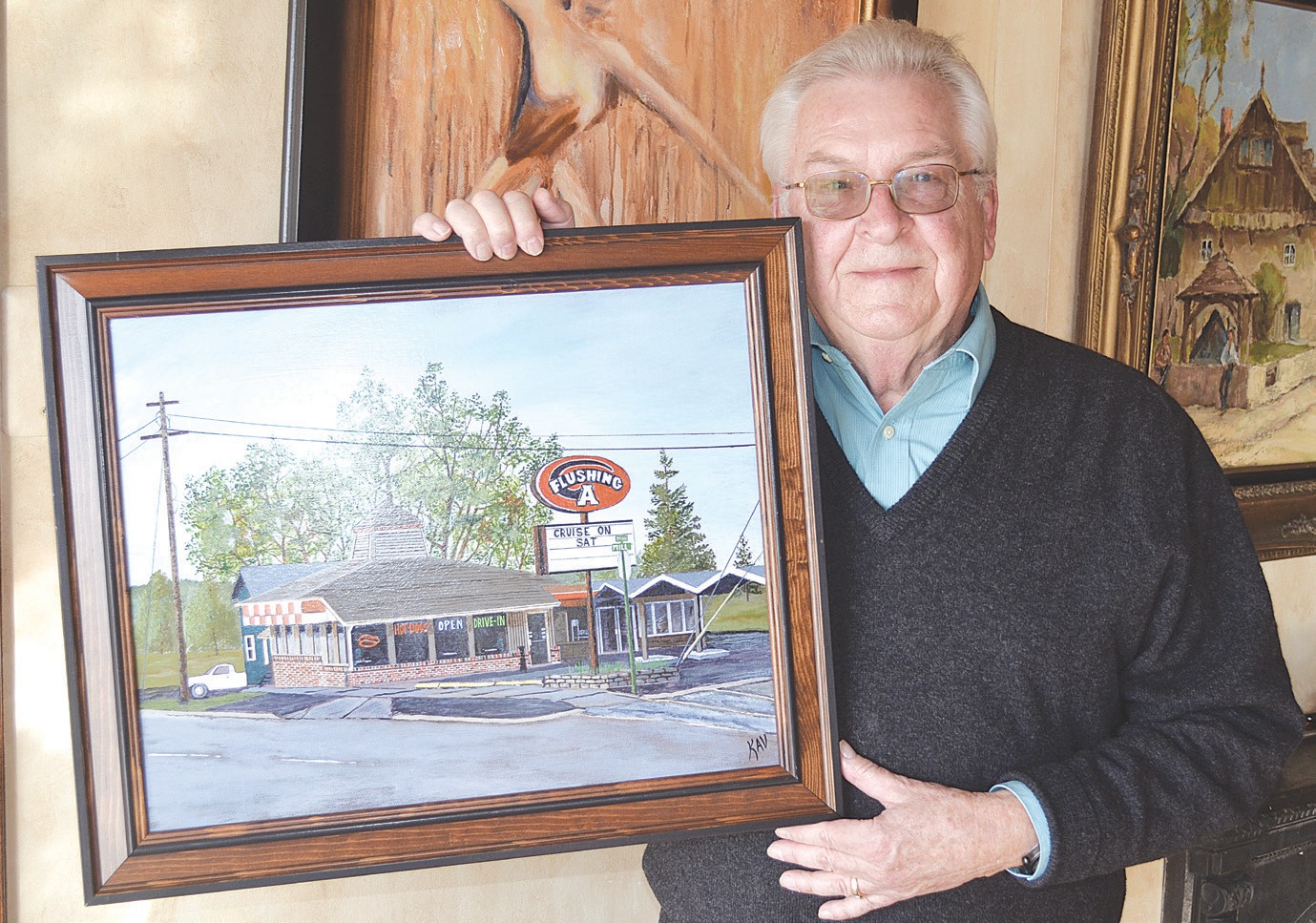 Flushing artist captures landscapes of his hometown on canvas

Kenn Van Houzen with his painting of the Flushing A restaurant. Photo by Ben Gagnon

RINSING – When Flushing native Kenn Van Houzen retired from teaching in 2010, he found himself with plenty of free time and a desire to revive an old hobby that had been dormant for years: painting.

Today, Van Houzen spends many hours painting scenes of his hometown, from historic buildings to local businesses and popular city sites. Some of his more notable subjects include the Rossell Funeral Home, Cary Ann’s Hallmark Store, Raider Field, the Riverview Park Bandshell, the former Flushing Fire Hall on Maple Street, the Flushing Depot, and the Flushing A restaurant.

Van Houzen, a resident of Flushing since 1974, said he enjoys depicting his community on canvas, especially downtown storefronts and old buildings.

“The 100 block of Main Street is a gold mine for painters,” he said. “You could do a hundred paintings on this one block because there’s so much interesting architecture.”

About six years ago, Van Houzen began posting examples of his acrylic paintings on Facebook and Flushing-related social media pages. As his works received compliments online, he began accepting offers to complete painting projects for clients.

“Recently I’ve taken on a lot more commission work,” he said. “People in the area have seen my Flushing paintings and they will ask if I can paint their home or business. I like to see the joy that my work brings to people.

Van Houzen, originally from the town of Fraser in Macomb County, began painting when he was 18 years old. After getting married and starting a family a few years later, he said he was too busy with work and raising children to have time for art. .

After retiring from a 34-year teaching career at Flushing Community Schools, Van Houzen’s wife, Amy, persuaded him to pick up a brush and start painting again.

“She said, ‘You used to paint a long time ago when we got married. You should go out and buy canvases and paints and start over,'” Van Houzen said. . And it must be addicting.

What started as a post-retirement activity for Van Houzen quickly turned into a passion he wanted to share with others. One of his earliest works was a portrait of the Village Florist shop on Main Street, which he created for Village Florist owner Bryanchikovich “Bryan” Rubinstein.

Van Houzen, 70, was also able to show his paintings several times at Rubinstein’s Elbow Room cafe, which he said was a big step in revealing his art to the public.

As he prepares for other projects this winter, Van Houzen said he hopes his work shines a positive light on his community and inspires others to pick up a hobby or new skill.

“A lot of people look at my paintings and say, ‘I could never do that, or I don’t have the talent to do that,'” he said. If you are just starting out, you will be surprised. Just do something you love and go for it.

In addition to his commissioned work, Van Houzen has copies and postcard versions of his work for sale at Cary Ann’s Hallmark store on Main Street. He also painted landscapes and scenes from other Michigan communities.