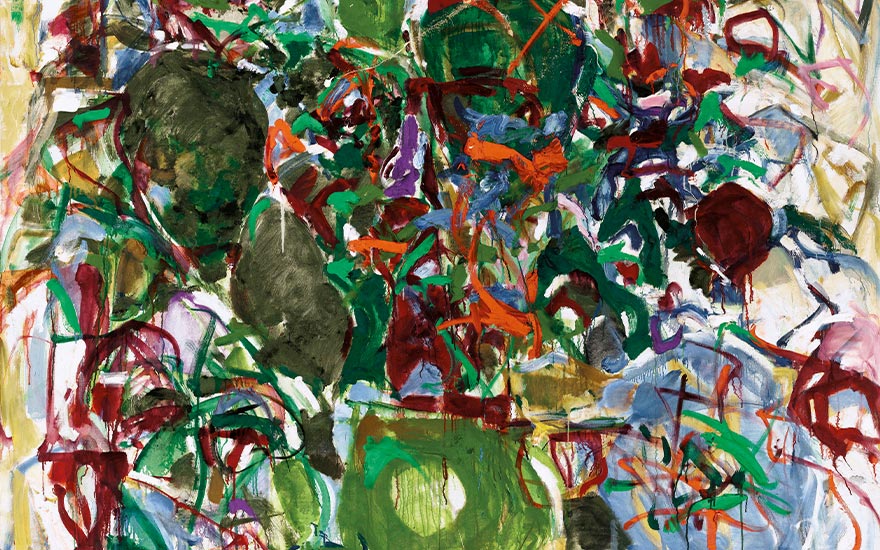 A Thrilling New Meaning of Life: Untitled by Joan Mitchell

Painted at a pivotal moment in Mitchell’s biography, this museum-quality masterpiece marks the artist’s auction debut at Christie’s Asia

The 1960s were a particularly eventful decade for Joan Mitchell, both in life and in art. After turning her back on the acclaim she had enjoyed over the previous decade as an abstract expressionist in New York, she now lived in her adopted homeland of France.

She would suffer a series of tragic losses in quick succession – with the death of her father in 1963; his mother in 1966; and his friend, the poet Frank O’Hara, later that same year.

The art she made during this time was arguably the most interesting of her career too, and on November 30, her historical canvas, Untitled (1966-67)is offered by Christie’s in its 20th/21st Century Art Evening Sale in Hong Kong.

‘Untitled is a painting of uninhibited exuberance,” says Elaine Holt, vice president and international director of Christie’s Asia Pacific. “It is a masterpiece that marks a creative peak in the work of Joan Mitchell”.

This will be the first time that a painting by the artist will be offered at Christie’s in Asia.

Mitchell was born to a wealthy Chicago family in 1925. Her mother and father were a co-editor of a poetry magazine and a doctor, respectively. Guests at his childhood home included TS Eliot and Ezra Pound.

In her youth, Mitchell excelled as an athlete, notably having success in figure skating, in which she competed nationally. According to the curator, Klaus Kertess, one of her close friends, “the speed, precision and reflection that had served her as a champion ice skater were [in later life] transmuted into painting”.

After studying at the School of the Art Institute of Chicago, the artist moved to New York, where she established a studio on West 11e Street. In a short time, she had become, alongside Lee Krasner and Helen Frankenthaler, one of the few female stars of the abstract expressionist movement.

It is said that she drank as much and as regularly as her male counterparts at the Cedar Tavern, an iconic Greenwich Village bar where Jackson Pollock, Franz Kline and Willem de Kooning met.

Mitchell had her first solo exhibition in New York at the New Gallery in 1952. Over the decade, she refined what would become her signature style: a mixture of rhythmic lines and layered color fields. She also became increasingly drawn to the offer of moving to France, the country where many of her modernist heroes – from Cézanne to van Gogh – had lived. In 1959, she moved to Paris.

As already noted, both of Mitchell’s parents died relatively soon after, which was vividly reflected in his art. She refers to paintings from this period (the early 1960s) as her “black paintings”. They aren’t black per se, but the name does reflect their dark mood and palette. A typical example – like 12 Hawks at 3 o’clock (1960), sold at Christie’s in 2018 – has a dense mass of dark colors in its center and areas of soft white at the edges.

Untitled represents nothing less than a stunning throwback to the era of black paintings. Anxiety gives way to optimism. The image radiates life, with colors as vivid and kaleidoscopic – and gestures as bold – as any Mitchell has ever used. He also features an all-over composition (with no central mass), reminiscent of the work of his New York years, maximizing every square inch of canvas.

“I paint from landscapes that I remember that I take with me – and that I remember the feelings of, which of course transforms,” Mitchell said. “I could certainly never reflect nature. I like more to paint what it leaves me”.

This quote from the late 1950s gives us valuable insight into the artist’s practice. Unlike many Abstract Expressionists, Mitchell admitted that a hint of figuration found its way into his imagery. What then could we look into Untitled?

Trees were a frequent subject for Mitchell, and the dynamic drips, daubs, smears, and rings in different shades of green certainly hint at it. Perhaps unsurprisingly, given that the same year Mitchell completed this painting, she also purchased a country home in the quaint Seine River village of Vétheuil, 40 miles to the northwest. from Paris. She will stay there all her life.

Claude Monet had indeed lived three years in Vétheuil, before settling near Giverny (where his famous water lily pond is located) in the early 1880s. He painted many views of the village, like the one below , now in the collection of the Metropolitan Museum of Art in New York.

Like Monet, Mitchell seems to have been seduced by the colors and bucolic landscapes of Vétheuil: its light blues alluding to the sky and the Seine, its reds to the poppy fields that surround the village.

Much like Monet (and his fellow Impressionists) – albeit more abstractly – Mitchell aimed to visualize the sensation of a transient moment in nature. “This particular thing that I want cannot be verbalized,” she said. ‘I try something more specific than the films of my everyday life. [I’m trying] define a feeling.

The link between Mitchell’s and Monet’s paintings is actually the subject of a major exhibition currently in Paris.

Van Gogh is another artist often cited as having influenced America. Untitled one could say that this influence manifests itself in the vibrant treatment of the blooming flora.

‘Untitled epitomizes Mitchell’s ability to fuse the gestural dynamism of Abstract Expressionism with themes and philosophies born of European Modernism,” says Holt. “Its forms escape specificity, and yet together create a complete and harmonious composition”.

Two years after completing UntitledMitchell painted another painting inspired by Vétheuil, called Blueberry, which is currently the most expensive work by the artist ever sold at auction. (It grossed $16.625 million at Christie’s in New York in 2019.)

Mitchell made several trips to the United States after moving to Vétheuil. However, she continued to inhabit the French village until her last day, in 1992, at the age of 67.

Untitled captures the new sense of freedom and space that Vétheuil offered him, after years of city life in New York and Paris. You could even say an exciting new meaning of life.

“Exploring where the natural and manufactured worlds collide” – Hastings Exhibition